Exploring the Map
The most exciting part of any real-time simulation (rts) game is venturing off into the unknown. Because you never know what is going to lie around the next corner, you are always kept on the edge of your seat. It is the biggest factor of addictiveness in any rts. In Warcraft 2, there are 3 different 'levels' of explored areas. These are unexplored, fog of war, and explored.

1. Unexplored Area
Any places that you have not visited at all on a map will be unexplored. When an area is unexplored, it is completely covered by blackness, and you will not be able to see anything through it.

2. Fog of War - Previously explored areas
Fog of war is what makes this game exciting. When your troops explore an area, they will see what is actually there. But after they leave the area, you no longer have any of your units scouting the area. You no longer know what is really there. Through the fog of war you can see the layout of the map, but not any enemy units or buildings. Exploring the same area 30 seconds later could find a new enemy encampment that has been setup, or even an entire army that is getting ready to attack. If you have never played a game with fog of war, than it might seem a little scary. A lot of times there will be a whole lot of trouble that lies beneath the fog, but you cannot let it scare you. Knowledge is power, and by knowing what's out there allows you to adjust your game accordingly.

3. Explored Area - Areas currently occupied
Explored area is any spot on the map that your units, or buildings can currently see with their visible sight range. When an area is explored, you can see anything that is happening in that area. If any enemies come into a visible area, you will see it right away. 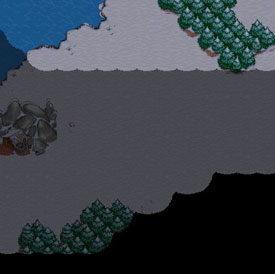 Here is a simple in-game picture that demonstrates all 3 of these types. The top part of the picture is part of the map that I currently have scouted (in this picture a scout tower sees this far for me). The shaded grey area to the right of the gold mine is the fog of war. I have not explored that area for a few minutes, so I don't really know what lies beneath there. There could be a huge army just under below the sight range of my scout tower, that are preparing to attack me. The bottom of this picture is a part of the map that I have not yet scouted with anyone. You can see it is completely dark. I have no idea what is there at all (and you don't even get to see the map layout). This may be a very simple concept, but you will learn later to use the fog of war to your advantage for setting up attacks, and hiding important units where the enemy can't see them. You will also learn to scout efficiently using a units sight range, saving valuable seconds wherever you can.