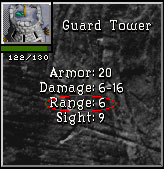 The tower bug wasn't discovered until years into Warcraft's life. This bug is a major flaw in the game and can be exploited for strategic purposes in all kinds of situations. In fact, if you don't know how the bug works, you might think someone was hacking when the enemy towers seem to shoot further than yours.

A range of 6
Before we get into the tower bug, you first must know that a guard tower has a range of 6. That means, that any unit, or building 6 games 'squares' away in ANY direction will be shot at by the tower.

What the heck is this then? 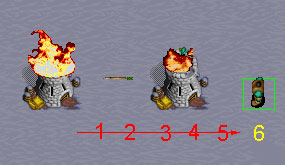 Here is a simple screenshot to introduce the tower bug. The enemy tower is on the left, and my tower is on the right. As you can see, the towers are shooting at each other. The red arrow shows you that my peon SHOULD be in range of the enemy tower. And since a tower will always shoot at units before buildings, why is my peon not getting killed? The peon is located 6 squares to the right of the enemy tower, so it should be getting hit, right? My peon is safe in this picture because of the tower bug. Something really strange happens to a tower when there is an upgraded enemy tower within range.

Now, to understand this, you must realize that a tower takes up a 2x2 area of the playing area. Meaning, a guard tower takes up 4 'squares'. The picture on the right demonstrates this.

Now, when a tower does NOT have another enemy tower within range, the tower seems to work fine. It will shoot units or buildings located 6 squares in any direction. However, when there is an upgraded enemy tower within range, the way towers work change. What happens is both towers (yours and the enemies) now shoot out of the top left corner. I've represented this by the green color in the picture. So now go back up and take a look at the previous example. My peon is not being killed in that example because the enemy tower is shotting from its' top left 'square'. That means that the numbered arrow at the bottom is actually wrong. The enemy tower is shooting from the top left, so the first range will only be making it to the right side of the tower. The enemy tower has lost a 1 range because of this.

'Up' and 'Left' have more range
Knowing that a tower behaves like this gives you an advantage. And if you have your tower to the right, or below the enemy, you can exploit this to easily win a tower war.


The first picture shows you the range that both towers have. Since the bug is in effect (an upgraded enemy tower within range), both towers are shooting their arrows from the top left corner (shown by the green box). You can see that this causes the tower on the left to actually lose 1 range compared to the tower on the right. The second picture is simply the results. There is no way that the purple player can repair that tower without losing peons. The player on the right is completely safe, and will never be hit by the enemy tower.

Some other things to keep in mind
REMEMBER: this only works for UPGRADED towers. If you are trying to tower into someone, do not try to place your tower with 3 spaces between theirs. The enemy tower will kill your peons because your tower is NOT upgraded. But on that same note, if you can get a tower upgrading within 10 seconds of an enemies tower, you can simply let your upgrading watch tower take the damage until it is finished upgrading. Once it is upgraded, it gets the extra hit points, and your peons will now be able to repair it because it forces the enemy tower to 'change' its shooting style.

This works for cannon towers too. Because cannon towers have a range of 7, you have to add 1 range to everything. Place your cannon tower 4 spaces away instead of 3. I did not cover this because you will rarely use this. Maybe once in 2500 games, and it will be when you and your enemy moved to the same starting position (eg. mid-left on garden of war).

Watch for this all the time. This is used alot, and can win and lose you games. If an enemy is going to kill your tower with this bug, you have to do something to prevent them from towering into you endlessly. Just remember, 3 spaces in between the towers means the tower bug, and that the tower bug gives a tower more range up, left, or any combination of the 2.

Strategy - Main | Top | [an error occurred while processing this directive]