One Hall Power to Keep/Stronghold
This is a peon stop powering strategy designed for maps with smaller gold mines. This is an easy strat to do, and can win you alot of games even if you don't really know what you are doing. Back when my brother first started playing this game, he couldn't win many ladder games. He was getting frustrated so I showed him this cookbook order, and he started winning most of his Plains of Snow games immediately.

When it works
If the map has gold mines that are larger than 40000, then you probably shouldn't use this. On a map like Garden of War, this strategy would get run over almost all of the time. It works best on maps that players generally like to rush on, where the mines are between 30-40 thousand (plains of snow, gold seperates east from west, mine the center, etc.). It is also a counter-rush strategy. It's designed to beat a rusher, whether he tries to tower you, cat you, sap you, or rush heavy and go straight for lust.

The build order
Peon 1 - Hall, farm, barracks
Peon 2 - farm (then continues building farms until you have 21 food).
Peon 3 - smith
Peon 4 - mill
Peon 5 - gold
Peon 6 - gold
The barracks finishes and the peon (1) is sent to gold.
Peon 7 - gold
Peon 8 - gold
The mill, and the the smith will finish as peon 9 builds. Both peons go to wood. Start building a catapult as well as upgrading your first weapon upgrade.
Peon 9 - gold
Peon 10 - gold
Peon 11 - wood
Peon 12 - wood
Peon 13 - wood
Peon 14 - wood
As peon 15 builds, the catapult will finish, as well as the smith upgrade. Start the first shield upgrade immediately.
Peon 15 - gold
Go stronghold as soon as peon 15 finishes. At this time you will have 6 peons on wood, and 8 on gold. As you are going hold, take a peon who just brought in a load of wood and start a 2nd barracks.
Level 3 completes. Start the 2nd shield upgrade immediately.
Now, just before your stronghold finishes, pull 2 peons off of gold. One builds the ogre mound, and the other one repairs it. You do NOT build any more peons. Take the next peon that brings lumber in, and build a 3rd barracks.
Barracks number 2 finishes, and the peon goes on gold.
Pull another wood peon, and build a farm.
The 2 peons who built the mound go on gold.
The peon who built barracks number 3 goes on gold.

You now have 15 peons (11 on gold, and 4 on wood). You keep pumping out ogres from all 3 barracks as soon as your resources allow. You want to also have a peon chopping out, so that he is finished by the time you have 2 ogres finished. Just tell your first 2 ogres to stand ground in the space you chopped out, and no grunts will ever get through. You want to do this because if someone gets a catapult to your wallin before you are chopped out, they can contain you, and never let you get out. So you want to be able to get outside of your base as soon as possible.

As you get a few more ogres, send a couple around to scout. By the time you find the enemy, you should have 6-10 ogres and your cat. Send absolutely everything at them. You should easily take out any ground forces that they have. If they don't have a tower started or upgraded, they are already dead. If they do, use your cat to take it out. Make sure you don't lose any/many ogres to the enemies tower(s).

Alot of times the enemy will have a cannon tower upgraded in which he will repair with several peons against your catapult. If this is the case, then see if you can just use your catapult to attack ground in his peon line, in a spot that is out of range of his tower. On the maps that this strategy works on, you can do this alot of times, and win the game just by protecting your cat.

If you can't do that, just back up your catapult a little bit and start having at it, on whatever building you feel like. Keep pumping ogres non-stop at home, and sending them to the enemy. Because you did a peon stop (15 peons), you can just overwhelm the enemy off of your 1 mine. Just make sure that they didn't sneak out an expansion somewhere.

2 Variations
(1) The above power gives you 3 barracks, pumping out level 4 ogres. With a slight change, you can get ogres a little quicker, while having 2 barracks pump level 5 ogres. You just have to go Stronghold 1 peon earlier (14 peons). You will still start your 2nd barracks, and 2nd shield upgrade as your Hold is going. Once again, you will pull 2 peons from gold to build the mound. Start your level 5 upgrade as soon as you can, and continually pump ogres from 2 barracks.

(2) On a smaller map where you know where the enemy is, or on a map with even smaller gold mines (one way in, one way out) even faster ogres are sometimes necessary. Follow the same order as above, but peon 2 only builds 4 farms (17 food total). You also don't upgrade any levels at your blacksmith until you are going stronghold. Start upgrading to Stronghold when you have 12 peons (yes 12!). Use your farm peon to start a second barracks, and start upgrading your first weapon at the smith. Two peons are used off of gold to build the mound, and then put back on gold. You should have 4 choppers, and 8 peons on gold. Pump level 3 ogres constantly and pull a chopper from wood whenever you need a farm. I rarely use this order, but it's fun to play around with once in awhile because you get ogres fast, and you can keep pumping them. Other than that, it doesn't give you many options :).

Things to watch for
A 2-Haller is your worst enemy. You probably will lose against a 2-Haller, but if you do want to have a chance, you NEED to take out one of his bases immediately. You need your cat to take out the defense, and you need to raze as many buildings as you can fast. Preferably, the base that has their barracks.

You do not have much room to build. You have to plan your wallin very carefully. You have to be able to fit 2-3 barracks, a smith, mound, and mill somewhere. And you won't have much wood chopped out for you by the time you need all of this stuff. There are a few things you can do to help.
-Make sure your chopper peons are taking 2 trees at once ('magic' trees, as they have come to be known).
-Wall out a little further than you normally would.
-Have your farm peon end up on the outside of your wallin after he completes one of them. You can still hide farms out there somewhere, and bring him back to build your 2nd barracks as you go Hold, while using your cat to protect it. Just be careful of a heavy rusher who will probably be able to raze your 2nd barracks if the attack is timed right.

Sometimes you will lose many ogres, and other games you won't lose many at all. You have to plan your farm building carefully, depending on what the enemy is doing. You don't want to build your food up to 33, and only have 5 ogres (21/33 food). 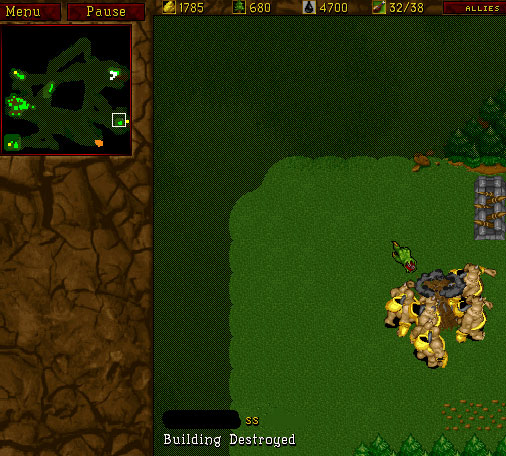 This screenshot is a game where I used this strategy. My ogres in the screenshot, are in my dead allies start base. You can see that I'm razing whites base, who did a heavy rush, and then tried pumping knights. The orange guy (the guy who is requesting a screenshot here), killed my catapult by slowly working away at it with ogres. I could not get any closer to his line, so I couldn't do any damage to his peons. However, he tried to get fort, and because I had done this low peon order, I had way too many ogres for both of them.

Also check out this related thread regarding getting fast ogres with a 2 Hall, posted by Ash.

Strategy - Main | Top | [an error occurred while processing this directive]